It is fair to admit that prior to working at a Liverpool Animal Health Center, I had never really thought about the bond that people shared with their pets. I owned a dog and a cat at the time, and while I considered them to be part of my family, I had never pondered how animals affected the lives of others. Within the first few hours of my very first shift, and every day since, I have marveled at the devotion and love exhibited by owners and pets alike.

From my vantage point behind the front desk at LAHC, I have witnessed an endless array of different relationships that exist between humans and their four-legged friends. While each is interesting in their own regard, there is one unit that may be the most unique and intriguing of them all.

At Liverpool Animal Health Center, we have the privilege and honor of caring for a number of government agency dogs. Officers from the New York State Police, City of Oswego, and the United States Border Patrol utilize LAHC for their veterinary needs. Like most people, I had seen K9 officers on patrol and featured on television, but that is where my familiarity ended. Now, I fully understand and appreciate what these officers mean to their handlers and their community.

Recently, I spoke with Sergeant Jeffrey Cicora of the New York State Police about his initial decision to bring one of his partner’s to LAHC, and the dynamic of working with a K9 partner. His responses were enlightening, honest, and insightful, and provided an intimate look at an incredible bond.

How long have you been a K9 handler for the police department, and what are some of the duties expected? 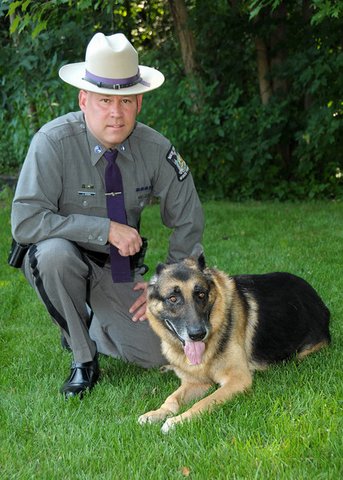 I am a New York State Trooper and I was stationed out of the Baldwinsville barracks near Radisson for over 20 years. In June of 2001, I was chosen to be 1 of 2 canine handlers in Onondaga County. I completed a rigorous 20-week K9 basic training school in Cooperstown, NY with my first K9 partner (“Devitt”) who has trained in explosives detection as well as handler protection and tracking. There was never a question as to what veterinarian I would use to take care of my partner. We were always treated like family at LAHC, and if Devitt ever had a medical problem the staff and doctors took immediate action and treated the problem. We certainly didn’t request or demand special treatment, but the doctors always seemed to take a special interest in us. They seemed to know the importance of the job and duties that we performed on a daily basis and did everything they could to make Devitt comfortable and get him back into service as soon as possible. Devitt wasn’t just a dog, and he wasn’t just a partner. He was my boy! He kept me safe, and in turn, I kept him safe. We were a team! We spent nearly 24 hours a day, 7 days a week together, but when times arose that I had to leave him, I knew he would be well taken care of at LAHC. I trusted that the doctors, technicians, and animal caretakers would protect him as I protected him. I never had any reservations about his care.

Immediately following the terrorist attacks on 9/11, Devitt and I received orders to deploy to JFK and LaGuardia airports in New York City. Devitt and I spent nearly 6 months searching planes, luggage, motorcades, and airplane terminals for explosives. In the winter of 2002, we were once again deployed to NYC to scour the subway systems in Manhattan for an Elevated Orange Alert. We were tasked with searching the subway terminals and trains in an attempt to deter terrorists. Devitt was also credited with tracking and apprehending numerous felony and misdemeanor suspects during his career. Sadly, I lost Devitt in August of 2010. My friends at LAHC were very compassionate, and I’m sure his passing was a loss to them as well. In exchange for all the years of great service, I presented them with a framed photo of Devitt, which hangs proudly in the main hallway. I am sad, yet proud to see him every time that I go in.

In February of 2010, I trained my second explosives detection partner, “McGinn”. We graduated from the K9 basic training school in May of 2010 and patrolled the northern part of Onondaga County. One of our first orders of business was to meet and greet our friends at LAHC. Like my other dogs, McGinn was welcomed into the LAHC family. Although McGinn’s career was cut short by my promotion to Sergeant, he is still treated like the trooper he is. To McGinn’s credit, he was honored for his part in apprehending murder suspect David Renz on March 14, 2013. McGinn is now retired and belongs to me, thanks to the generosity of the New York State Police. His duties are much different now but he continues to meet me at the back door as I get ready to leave for work each day.

When did you first start using Liverpool Animal Health Center for your veterinary needs?
In 2005, my wife Valerie and I moved to the Baldwinsville area from Syracuse. We had Devitt at the time, as well as a cocker spaniel named “Brandy”. We did not have a local veterinarian, so we tried several different practices in the area. When we finally tried LAHC, we were pleasantly surprised at the friendly service provided by the staff and doctors. Despite our hectic schedules, we were able to get in for appointments at just about any time. If it was really busy, the awesome receptionists would go above and beyond to find a way to fit us in. When we got in to see the doctors, we were treated with respect and given medical information in a way that we could easily understand. The doctors were always very professional and never tried to oversell their services. We found ourselves in the office quite frequently over the years for a myriad of reasons and built a great rapport with the staff and doctors. I am proud to say that I consider the staff at LAHC to be a part of our family. 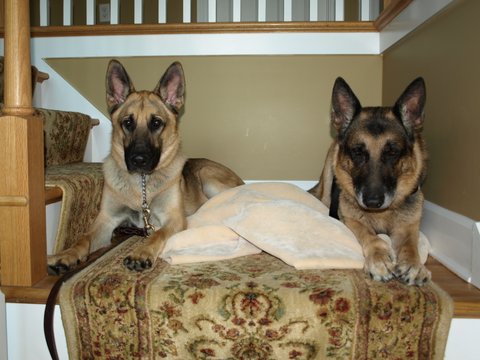 Why is it so important to have a veterinarian office you can trust?
Our K9 partner’s health is very important and it is essential to always feel comfortable knowing that your dog is getting the best treatment available. You should be able to trust your vet just as much as you trust your dog. Police work is inherently dangerous and you must be able to trust that your vet is trained and prepared for the worst-case scenario if your dog goes down. In all of the years that I have been going to LAHC with my K9 partners, I have never questioned their ability to give my dogs the very best care available.

Can you describe the relationship that is shared between a K9 officer and their handler?
When you work with a K9 partner 24/7 you develop a bond that is nearly unbreakable. They become part of your family. At times, you learn to trust them even more than your own instincts. You put their health and safety before your own, which is not how it’s supposed to be in police work, but at the end of the day, that’s how it is! Their love for you is unconditional, as is yours for them.
“No damn dog will ever sleep in my bed!” I once said. How wrong I was!
“They’re just a tool, a piece of equipment!” I once declared. How wrong I was!
“I won’t get attached to this smelly dog!” I vowed. How wrong I was!
“I don’t remember the last time I cried and sobbed like a small child” is a statement that I could once proclaim as the truth. But now, I’ll never forget. It was the day I lost my K9 partner.